As a Czech, photographer Jiří Hanke has a subtle perception of the Czech culture and lifestyle. The series of photos from Czech cities reflect the national features and mirroring the history of the end of 20th century better than words could describe. Fragments from Lidé z Podprůhonu portray the life of the working class in his home town Kladno since 1974 to 1989. For over 10 years he was documenting the daily routine of ordinary people. Even thought the architectural background and  sceneries have been changing, there were something more important Hanke had a focus on – people. Photos are about them in the first place and how their lives were changing together with the epoch.

Apparently, some of the photos are staged, though, people on them are looking straight to the camera and seem to behave absolutely naturally. It rather feels like they are looking at a close friend  or someone they trust to and there is no lens between them. Many things Jiří Hanke pictured reflects the atmosphere of Communist regime in the country. Industrial landscape adds a little bit of gloom. However, we still can see pure emotions, diversity of facial expressions, people on their tasks, enjoying the their work or lively talking to each other, drinking beer, spending time with families, simply living their lives as they are. Each photography tells the story, for me it wasn’t easy to figure it out what the story about, but I definitely could sense the message, felt that photos were taken for a reason and have strong emotional impact on the viewer. Hanke tells the story of the whole community and the whole city through the personages they photograph. 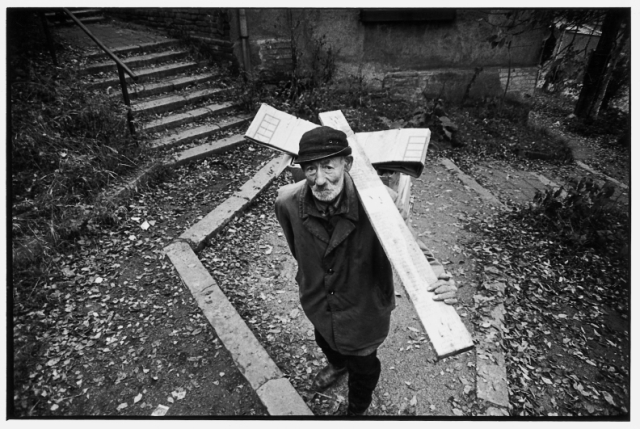 Jiří Hanke very adroitly plays with compositions, place his characters accurately to the place where they belong. The photo of an older man holding the cross-shaped board on his shoulder is one of the key work of the exhibition. Using the right foreshorten Hanke makes an accent on the face of the personage artlessly looking into the camera. There are the faint notes of incredulity and curiosity we can see on the face of an old man, covered with wrinkles and white carefully trimmed beard. His middle finger on the left hand is cut off, he has apparently lost it working on the factory. I admire how this character is framed, the portrait is surrounded by geometrical forms and lines, the board on his shoulder makes an extension of the facing on the ground, closing the asymmetrical rectangle around the man. Stairs from both sides looks like continuation of each other going from up to down, defining triangle shape rounding the building behind. 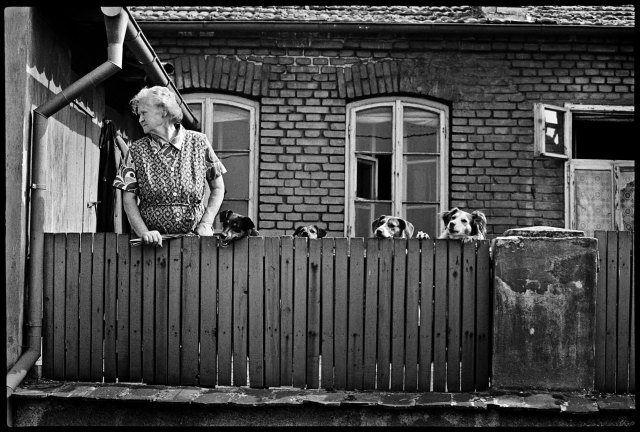 The photo of an old lady with dogs looking almost the same direction is perfectly framed by the fence on the bottom and by the roof on the top, the pipe on the left side closing the composition and adding the geometrical detail. Even though the lady concentrated looking somewhere to the right, pets looking out of the fence make the picture touching and funny, provoking the smile.

It is unique how unobtrusive and modest photos are, and how good they reproduce the atmosphere. All photos are in black & white, what makes all series about composition, details and emotions with no distraction of colours. I also find it great for historical documentary photography, to add authenticity and take us back to the times when it pictures were taken.